Honest College Review : 13 Things to Know About PCCOE Before Taking Admission for Engineering!

The first and foremost thing that you’ll notice after entering PCCOE is the striped blue shirt. Yep, that’s the uniform of PCCoE. This uniform has been a point of countless discussions in PCCoE. Students say we don’t need it and on the flip side parents say that’s the best thing about PCCoE and blah blah. If you wanna know more about the students’ emotions regarding the uniform, then check these posts on Facebook! 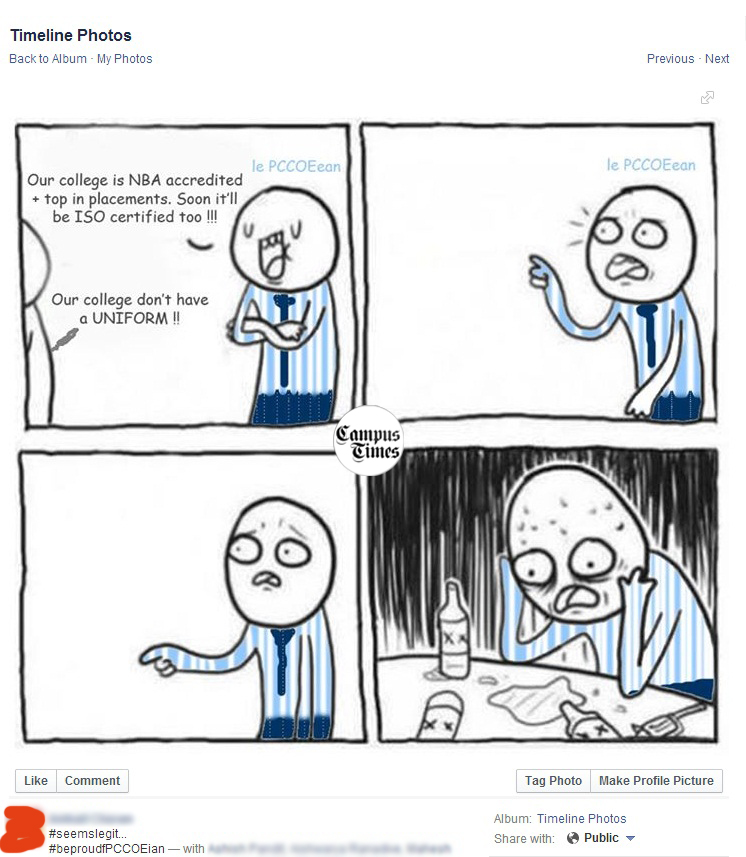 Ensure that you are prepared well to face the depression that will follow. Your friends at DY Patil, MIT, COEP, etc, would probably be laughing at you at this point. The RSCOE guys could make you feel better though!

CCTV surveillance is a pretty common thing in colleges nowadays. This college however has CCTV cameras installed inside every classroom and lab. Say good bye to your dreams of copying during exams or practicals.

The canteen menu has a pretty limited amount of choices. We are told that no matter what the choices are, you will probably end up choosing Misal-Pav for the rest of your life in PCCOE!

Also the principal of the college is a regular visitor of the canteen, so if he finds you in the canteen during lecture hours, it might not end well for you. Skipping the canteen and hanging out at these places nearby college is sometimes the best option!

Some of the faculty members in the college have some serious trouble with phrasing sentences in English during lectures. This some times turns into a disturbing factor during lectures but also an entertainment for students! With that said, the senior faculty in college are pretty cool and have a very good command over their language and teaching.

Unit tests are those small unwanted but dreaded exams that give you constant company through put your semester. This college used to conduct 2 unit tests in one semester. Although now that has changed to just one since the new university in-sem exams have started up!

The teachers and parents meet is held on campus at regular intervals. It helps teachers and parents come to common grounds and discuss issues on both ends of the spectrum in real time. Also it is that time of the year to get thrashed by your parents once they have been told about your attendance and results by your class teachers!

The college sends regular attendance reports and your unit test scores at your place by mail and SMS! So if you are one of those kids with low figures in both attendance as well as tests, run to your nearest mail box now!

There are two mega inter-collegiate events in PCCoE.

Techlligent was the biggie with events conducted at a grand scale in college, witnessing participants all over the state coming in to be a part of the event. Sadly though this event has been discontinued after some budget related controversy crept up. Techlligent 2012 conducted under the guidance of Prof. Rawandale Sir is reportedly still one of the best this college has ever witnessed!

Spectrum on the other hand is just restricted to FE students from colleges all over the state. This event too has managed to organize some amazing competitions in the past couple of years!

Over the years this college has seen a rise in the number of students from convent schools and colleges! So if you are still in college, you will probably have a better time having fun and mingling around with the others as compared to your seniors!

Just like an Indian Mom who grooms her daughter for marriage by teaching her household chores like cooking, stitching and stuff, PCCoE will also groom you right from your first year. And when you reach 4th year, no matter which branch you’re from, you’ll be completely ready to get ‘married’ to TCS.

NBA is National Board of Accreditation and ISO is International Organization for Standardization. This is something you’ll be hearing right from the first day of your college and it’s the same thing that is repeated in the Parent’s Meet held in college.

Being an engineering college, it’s mandatory for an institution to have high speed internet especially when you’re paying so much amounts as fees to this college. The internet speed has improved over the years but then again almost all the sites are blocked by SonicWall.

So that’s it! These were the 13 things to know about PCCOE that no one would tell you. But apart from these points, PCCoE is really good for your overall development and exposure as an engineering student.