9th episode is here. Grab your popcorn, get a fresh bag of tissues. Stock up the toilet paper and send your loved ones away, somewhere safe. Get the perfect iptv player so you can start watching GOT. You think you’re gonna meet the dragons in this episode.

They’ve been missing all the action. D&D tried to fill that gap with a LOT of action. Jon’s setting the stage for mutiny. Princess Shireen…. I don’t have the words. Stannis, that cocks**king moth*rfcker. Fuck Stannis and His grammar. I tell you what, I’m back in supporting Daenerys for the Throne. Sweet Daenerys, oh what have you done. Horseback my ass, we gonna do it Targaryen style. Dragonback. Lana meets a familiar face, gearing up for a Sweet revenge we’ve all been dreaming for seasons. 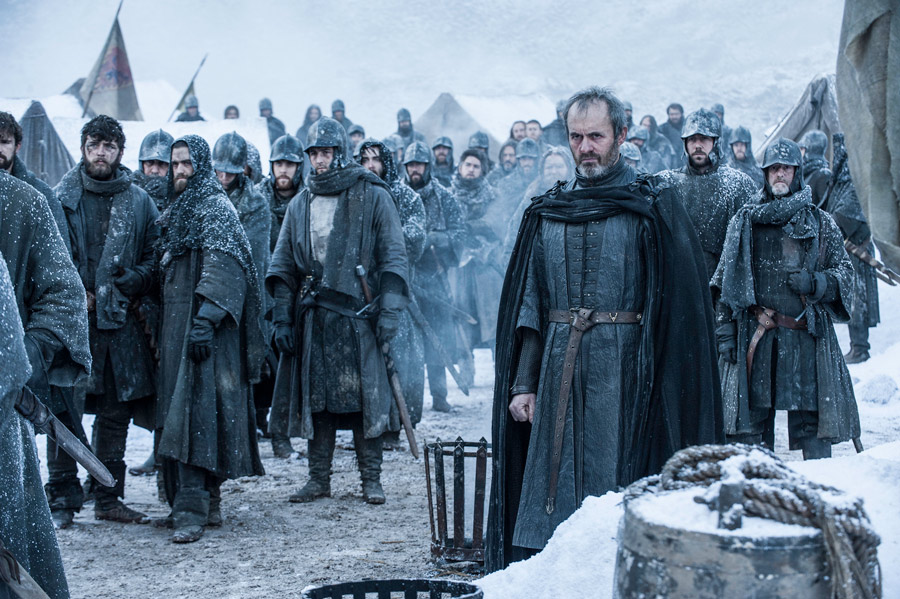 The episode kick starts with Ramsay’s “20 good men” burning the shit out of Stannis’ camp. Stannis looks rugged and tired and desperate. Davos explains that the Northerners know their lands better than anyone and that’s why they were able to sneak in without alarming the guards. But still they were able to count, there were 20 men… (f**k logic) And what the hell was with that look between Stannis and Melisandre? Admit it. For a moment you thought the acting Lord Commander Alliser Thorne wouldn’t open those gates and played out the entire fantasy in your head. Jon plus Wildings against the Others. But these days he’s playing the good cop. Which only means he’s gonna fuck up real bad in the finale. We see growing contempt in the night’s watch. Cold winds are rising, and winter is almost upon us. With the look that Olly gave to our smiling Lord Commander, I already hate him for something he hasn’t done yet!

The Cutest Farewell Ever Seems like a good enough reason to send Ser Davos away. But the moment Stannis say,

“My family stays with me”

You know it. One look in the man’s eyes and you know. And then we really know when Ser Davos bids farewell to ‘supposedy’ the most loved daughter on the planet.  A gift, really D&D? A farewell gift? And a Stag at that.

Okay Why are we even seeing the Dorne?

Alexander Siddig does a fantastic job. Prince Doran Martell is all that was expected and more. Myrcella is a useless teenager. So is Trystane. At least before they get to King’s Landing. Ellaria still spitting venom. One thing strikes about the Dorne is yellow. Yellow food, yellow clothes, yellow buildings. Instead of showing the amazing desert we get to see the matching uniforms of soldiers. 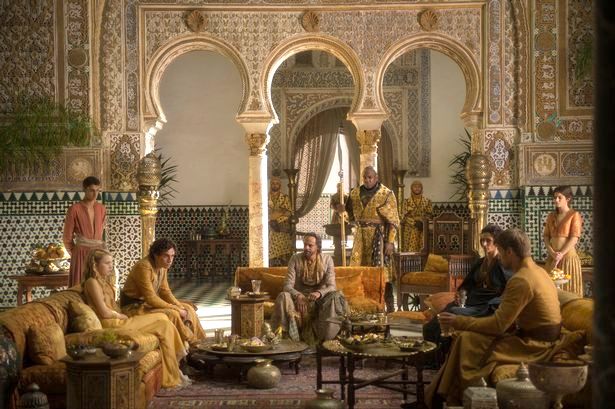 The sand snakes finally do something worthwhile. (Well no boobs this time). But the sisterhood between Nymeria and Tyene Sand is portrayed nicely. Bronn, oh how we miss these utterly unimportant characters. Aero Hotah too, with that gruff attitude and that mother-of-axe/spear thing of his. With the fact that he doesn’t want more blood spilled on his lands, Prince Doran is upcoming as the now Lord of Humor by sparing Jaime and Bronn’s life. Or is he? Oh for the love of God. Just give her The Needle back. Thin man would’ve been a thin corpse by now. All this poison and shit, it’s taking too long. Finale is almost upon us. And just like that, before you can stop complaining we receive the gift. Ser Meryn Trant of the Kingsguard lands in the free city of Bravos with Mace Tyrell. Finally, someone of the list meets up with Arya. 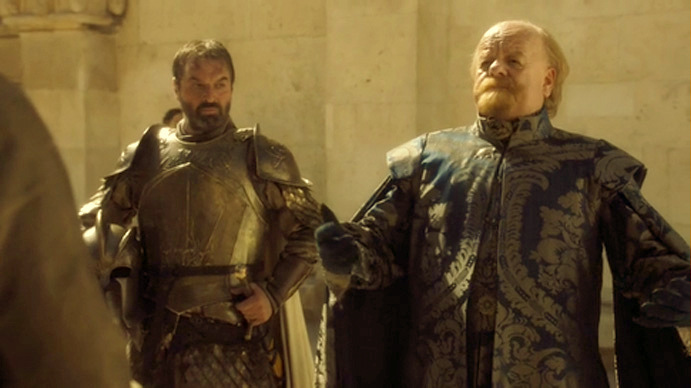 Now the question is, whether she kills him ‘Faceless men’ style or our old ‘water dancer’ style. Trant doesn’t help his chances. He only gives fuel to Arya’s hatred of him. A peadophile? Shits getting as real if you ask me. That was how GRRM intended them to be agreed, but reading and watching are two different things. Now either Arya’s getting really good at the game of faces or Jaqen H’ghar is giving his favorite intern some wiggle room.

Dorne will stay loyal to the Throne

Witty, you think he was. Well how about downright scary? It’s official. We know who our next favorite character is. Ellaria’s transformation is oddly suspicious. After all how stupid do you have to be to trust a snake? A viper at that.


And Father of the Year Award goes to...

I love that Stag, the toy not Stannis. The intricate details, the texture, its really beautiful. You think it’s another one of those heart breaking father-daughter moment. And it begins that way right upto the moment where she offers her help. Our beautiful little princess. She’s smart, caring, loving and probably one of the most well-read person in Westeros.

That look on Stannis’ face, resigned and defeated, tells the story we’ll dread for a long time. Of the things we’ve seen/heard/read people do for the Iron Throne, this was by far the WORST in history. A Funeral Pyre for a child of just the right size. Can’t believe it but Tywin Lannister was a better parent than Stannis. Now we know why Davos was sent away. He’d have killed or died protecting the princess. Come to think of it, he loved that child more than her own father. The good thing about this, I’m not heartless just pragmatic, other than magic, is that the soldiers know how committed their ‘King’ is. I mean he burned his own daughter, what’s more committed than that. 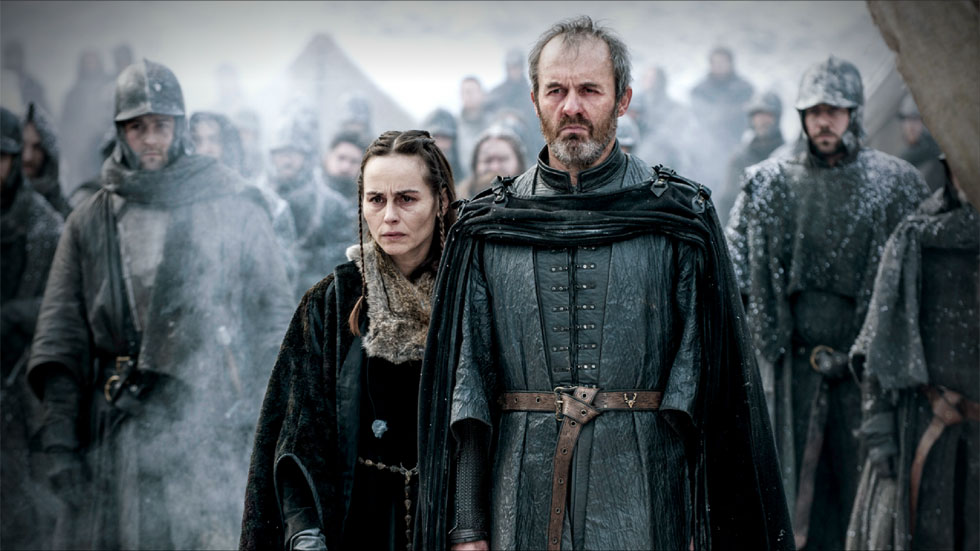 Selyse, that touched-in-the-head bitch, finally gets what she deserves for her blind devotion. Her motherly instincts kick off AFTER the pyre was lit. Me, I’m just glad she didn’t dance around the pyre. Her grief can kiss my ass. And Stannis, well he’s dead to me. I hope Ramsay Bolton gets his hands on him and makes another Reek for himself.

I’ll give D&D this much, no matter how fucked up those two are they produce GOOD television. Extra screen time for Kerry Ingram (Shireen), make people love her, make Stannis go mellow on her, more father-daughter bonding and then BURN her alive. Ratings through the roof. Internet Explodes. People hate them even more.

The Dance of Dragons 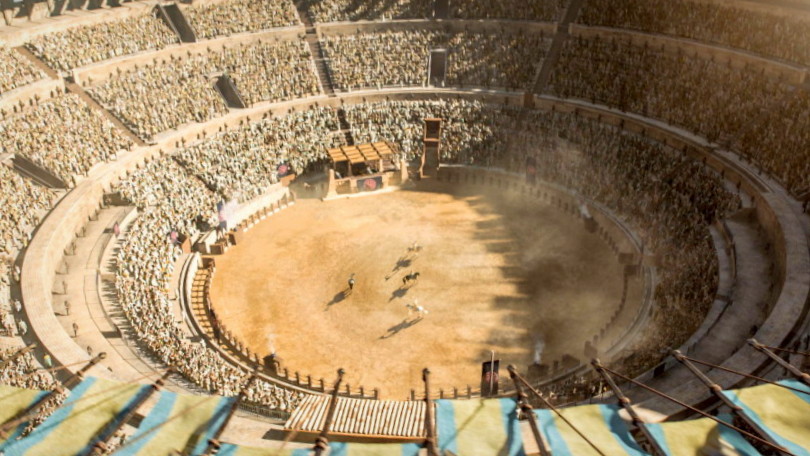 Look at that Daznak’s Pit, more like the Roman Colosseum. And the crowd going nuts, at least someone’s happy. Oh wait, what’s with the pouting Dragon queen? It’s politics, suck it up. Hizdar-Zo-Loraq says he was checking if everything was in order. And what might be so important that needs a King’s attention? We get to see a pissing contest between the ‘King’ and Daario Naharis. And why not with so much testosterone in the air. And then its Tyrion and Hizdar. As if this wasn’t enough, enter Ser Jorah of the Greyscale.

He’s not that good a swordsman as we thought him to be. Of course he can blame it on the Grayscale but that’s not very knightly is it? What we do see is a water dancer and a good one at that kicking Jorah’s ass. Of course he doesn’t die. He’s “important” than other lead characters. And being than Dance of Death. Sons of harpy ambush. Quite well planned and organized I must add. But what struck me most was the unsullied looking like extras. They are trained soldiers fighting homegrown gangsters wearing gowns. What is up with that? 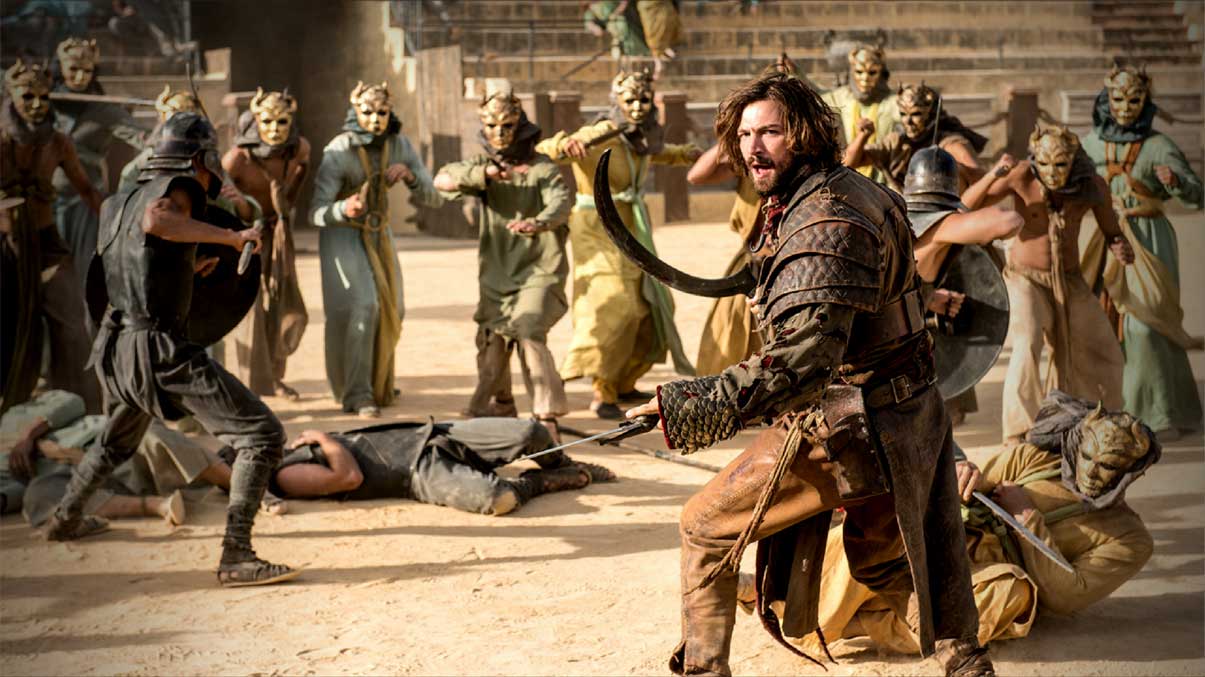 1 Targaryen loyalist for 10 Sons of Harpy. Yep, Valar Morghulis it is. Again the pause was a stupid move, unsullied should’ve held them back 300 style, I’m so going to produce my own movie one day. What’s new was Daenerys and Missandei’s relationship. They’re pretty tight in the books, but in the show this scene was an important one. The sons of Harpy ambush was a planned act and all of them (Dany, Tyrion, Missandei, Daario, Friendzone) are trapped. But then, there is a reason why the episode has been named “The Dance of Dragons”. 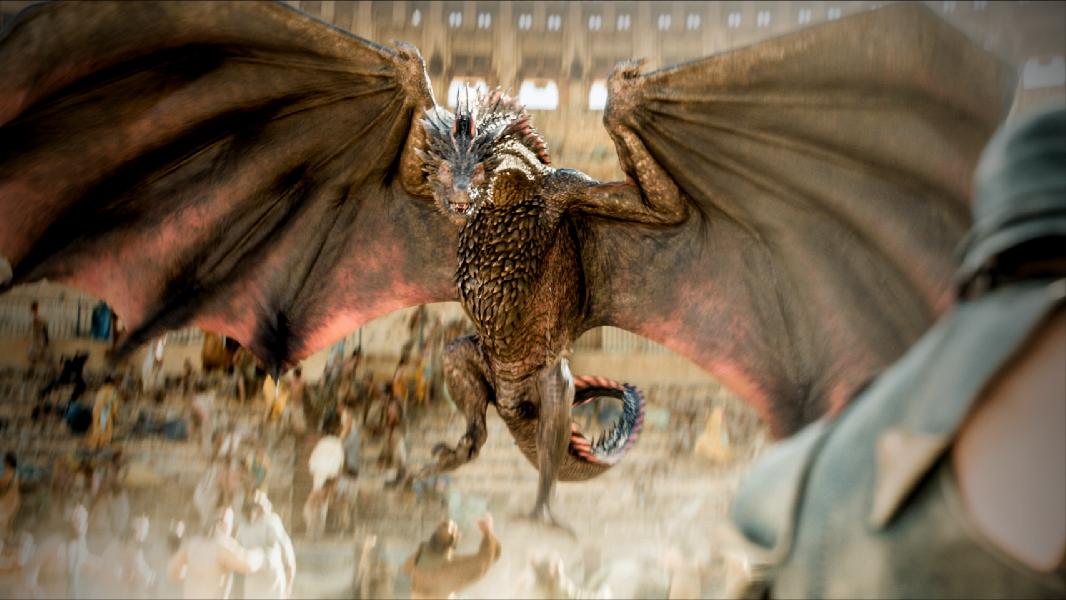 Ready to die? Fuck that mom, I’m here. *breaks the keyboard with excitement* The rebel’s who don’t run are roasted medium rare or chewed up whole. Must there be horrible deaths in 9th episode of each season? I swear to all the fucking gods if Drogon dies… what are you doing Khaleesi?

*Throws the monitor out of the window*

Valahd motherfcuker. Leave the nest, soar the skies. But do come back in the finale. CGI team did a fantabulous job with Drogon. The scales and horns and eyes. Also now we know why she was wearing the CAPE this entire season. Teasing a**holes them D&D. Drogon is pretty large in the books and also wild. This scene was so much better in the books. Especially when Daenerys holds the WHIP and beats the shit out of Drogon. That’s right. Remember Jorah saying,

“They’re dragons Khaleesi they can never be tamed, not even by their own mother.”

Alls well that ends well. Except for Shireen. That cannot be forgiven.

As for the finale, brace yourself. 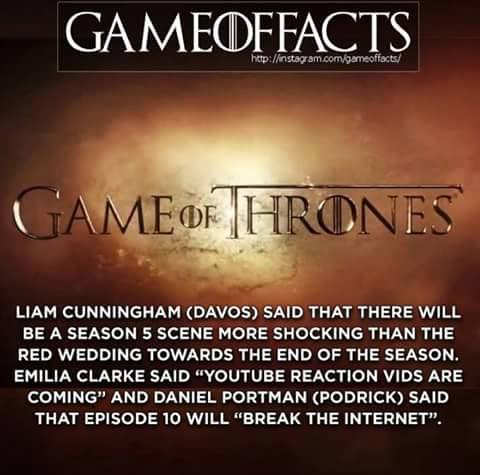 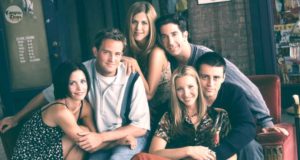