Internship at NDTV – Life And Times Of A Journalist In Making

Posted by: Richa Patankar in Self Improvement, Student Life November 2, 2018

About the Author: Rohan Parikh, a student of Ashoka University, interned at NDTV. He provides insightful details about his overall journey as a journalist and how it fueled him to pursue a career in journalism with more rigor.

The summer was around the corner and everyone from college had great plans awaiting execution. I had applied for an internship at a media house, NDTV, through the T&P cell of my college; however, I hadn’t heard from them and so wasn’t sure what I was going to do in the summer. One day, 2 months after I had applied, I received an email from the HR department of NDTV. My resume had passed the first round, and I was shortlisted for an interview. I went for the interview and the questions asked were not based on political occurrences in the country; instead, I found myself involved in different discussions with questions stacked in between. One of the highlights was the discussion on the importance of the press in upholding the fragile structure of democracy, especially in a vastly diverse country like India. My responses, one that concurred with the ideology of the organisation as well, was about the responsibility of a free press to keep the government in check. I talked about how a media house that functions as a mouthpiece of the government is no better than a propaganda machine; it is, in fact, an incisive and critical press that delivers the truth of a situation to the people, in order to maintain the powers of a governmental regime. The interview went well and I was offered a month long internship with India Matters, NDTV’s weekly documentary making department.

I came to Delhi and was swamped with work immediately upon arrival. Transcripting or translating endless reels of tapes, archiving hundreds of hours of footage that was sent in from across the country on a weekly basis, filling the metadata for each of the tapes, and of course, shadowing reporters and camerapersons to various locations across Delhi – every day was a whirlwind of new and unexpected events, with little time to sit and catch my breath. Even weekends were not exempt from the crushing workload. Several weekends I found myself hurrying to the office for some research work or to manage footage that was required for next week’s documentary. Every night would end with a lukewarm dinner at my PG at 11 pm, followed by a quick shower and brief phone call to my parents, describing the various events that occurred throughout the day. 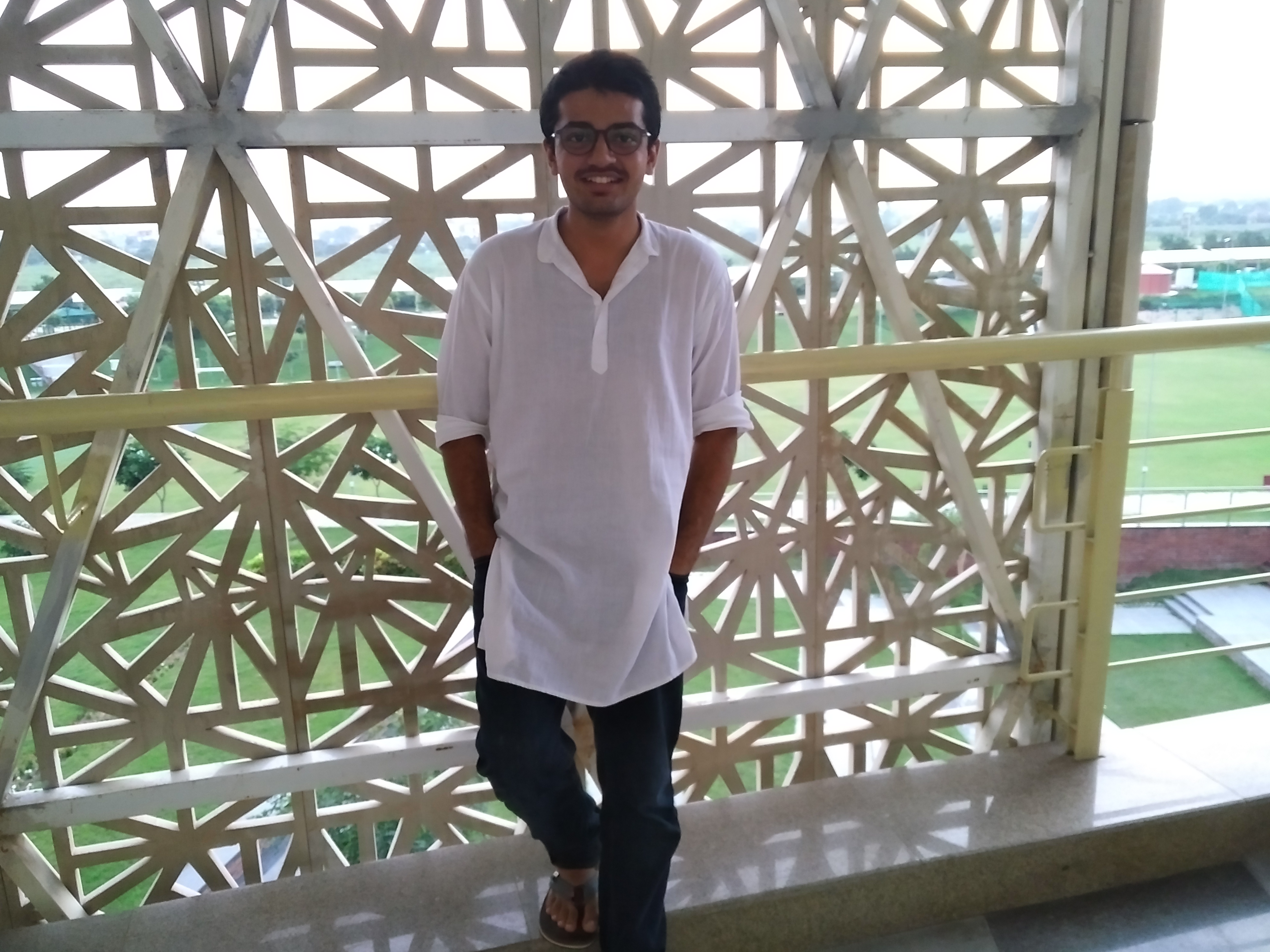 I learnt a lot through the course of two weeks. At the various shoots I went to, ranging from a nondescript bazaar lane in Chandni Chowk to the home of the famous historian, Ramachandra Guha, I got to see the various functional aspects of taking a good camera shot or asking decisive questions that aimed to elicit a specific answer from the interviewee. As I kept going for such shoots, I learnt to appreciate the amount of research that went behind each interview. After having been on three shoots in the first week, I was entrusted with my first assignment. I was to cover an art exhibition held in the Vadhera Art Gallery in Moolchand, Delhi, organised by the Foundation of Indian Contemporary Art (FICA). Two exhausting days later, I had conducted ten interviews which included those of the artists, the curator, and several visitors. The documentary was made and aired on television a few weeks later. Partly because I got lucky, and partly because I managed to acclimatise myself to the various nuances of reportage, a mere two weeks after having joined NDTV, I was offered my first major independent project.

30 km from Mandala, a small town in Madhya Pradesh, is a nondescript village, Kakaiyya. It’s an ordinary village that would have gone unnoticed by the majority of the populace of the country had it not been home to one of the most influential artists of our times. An old man sitting on the verandah of his house popped my team a toothless smile as we passed by with our equipment – Raza sahab ka film bana rahe ho? (Are you making a film on Raza sahab?) An Indian born French artist whose most prominent work, the Bindu, has inspired generations of artists, Syed Haider Raza was truly a man who lived to paint and painted to live, until, in the latter part of his life, his living and painting completely merged. Besides organising exhibitions alongside promising new talent, he put up the Raza Foundation, an organisation dedicated to working with young artists from all walks of life. And it was at the behest of the same organisation that NDTV had sent me and a cameraperson to Mandala to document the first death anniversary of this great man.

In Raza’s words, it was France that taught him how to paint, but it was India that taught him what to paint. It was in this pursuit of inspiration that he flew back to his homeland to relive his roots. And so did we – there we were, standing at the entrance of a school more than a hundred years old that had given birth to the artist in Raza. As we entered the small courtyard of the school, we heard the rhythmic chants of the children in various classrooms, repeating their teacher’s dictation. While the camera person started assembling his equipment, I was led to the office of the principal. During ensuing discussions, the masterji pulled out from one of the wooden cupboards, an old and musty register. Carefully placing it on the table, he started flipping through the pages until he arrived on a yellowed page that was wrinkled from the edges. Placing a pudgy finger on the sky blue ink, he traced it to a particular entry towards the bottom of the page. There, in lucid handwriting, the register proclaimed a twelve-year-old Raza’s admission to the fourth grade of the school, way back in 1931. We both gazed intently at that entry, keenly aware of the historical significance that this register would soon carry. After pouring over the register and the short messages that Raza wrote in a notebook for the school the few times he visited, decades later, I was escorted to a few classrooms in the front half of the school. They were in shambles, with the roof caved in and rubble strewn all over the floor. Regretfully, the school had not received the funds necessary to keep the building intact. Even though the school management had set up a new wing to accommodate the students, with a generous donation from Raza, one of the classrooms that had succumbed was the one Raza studied in as a fourth grader. I looked out of the window and saw a wild breeze blow the weakest of the leaves of a tall Peepal tree into the blue sky. Far off in the distance, several cows that looked like mere dots from the distance, grazed on the tall grass. Eight decades ago, this place would have been a veritable paradise. The vegetation would have been much denser, the tree covers much more prominent. Expecting Cheetahs to pounce upon one from behind a thicket wouldn’t have been entirely inconceivable.

I recalled my interview with one of Raza’s closest friends and confidants; a prominent writer, thinker, and Hindi poet, Ashok Vajpeyi. The fear of ferocious creatures prowling in the beautiful forest cover, he told me, was also a defining point in Raza’s understanding of art. In Raza’s words, he was born in beauty and fear. And throughout his life, his purpose through art was to separate the beauty from that fear.

The next couple hours were spent interviewing a few teachers and interacting with several students who eagerly stared into the camera. The rest of the day was spent roaming around in Mandala, talking to people to get to know how well they knew Raza. At the banks of Narmada that cut the town in two neat halves, a diligent group of artists under the patronage of the Raza Foundation were absorbed in their work. As I interviewed them, I got to know that they had come from various places in and around Mandala for the event. I spent the rest of the day admiring their works and then sitting on the banks of Narmada as the sun slowly dipped beneath the horizon.

Next day, I woke up determined to capture every moment of the day for it was 23rd July, Raza’s death anniversary. The whole town seemed to be abuzz with activity as the townsfolk prepared for the celebration. At 8 pm, I stood in a small cemetery where amidst the many nameless graves, stood two modest graves with white tombstones. Flowers had been arranged in a grid like fashion over both of them. They were the graves of Raza and his father, Sayed Mohammad Razi. Everybody present watched in silence as Ashok Vajpeyi paid homage to Raza and his father. The moment was short and intense. A heavy presence seemed to linger around us as we stood silently in front of the graves, each lost in their thoughts. A stunning performance by the classical singer, Kalapini Komkali, on the banks of Narmada truly commemorated the event and instilled it permanently into the listener’s memories. The following week was hectic and unsympathetic. Days and nights blended right into one another and bleary eyes became a common sight whenever I stared into the mirror. Five days after having come back, the documentary was ready and was aired on national television. As I saw my name in the credits under the reporter title, I thought back to how little I had planned out and expected of this summer, just a few weeks ago.

The internship ended a month later. Having been given an extension, I was entrusted with two research projects where I had to research about various details for other reporters. The first project was on the recent communal tensions in West Bengal and the other one pertained to the tragic death of several children in a hospital in Gorakhpur. The days were long and tiring, and behind each moment of triumph was a bag full of backbreaking work that often went unnoticed. As I headed back to college, a little thinner but a lot more satisfied, I reflected on the six weeks of adventure and the numerous learnings that NDTV provided me. I learnt that discipline is the most important aspect in the field of journalism. I learnt how one needs to stow aside all biases and don an objective lens to do justice to any news. On the whole, the internship left me tired, dazed, yet wanting for more. I will carry all the learnings and memories with me for a long time to come; however, this is far from the armchair nostalgia of a person who has lived through the entirety of his share of adventure seeking. This was just the beginning.

College events are an inseparable part of college life. Pune, as we know, is the city of the youth, here are 10 College Fests that you shouldn't miss in Pune.